Party Artists are renowned for their extraordinarily high albedo's. That's a word I learnt from the mustachioed charisma laden Sean O'Brien while looking at the moon late last year. It refers to the reflectivity of a surface and I use it simplistically and loosely because that's my style. We as Party Artists are a reflective bunch. Synchronistically we can see that the past is shaping the future and it is in our interests to contemplate what's happened thus far.

Sean O'Brien also goes by the name Joe Blossom and is releasing an album this Thursday. He used to play in The Losers with Lynton Denovan (Satanic Rockers) and Dan Lucka (FFM) who is my current roomie in a House On A Hill. Only for a few more weeks though,
due to the lamentable fact that :

Losers never congregate for long, it's one of the laws of nature - S. O'B 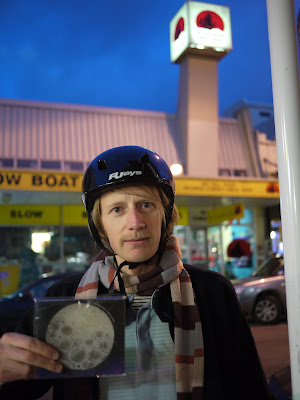 
Couldn't wait to review this one folks. Joe Blossom has made a sophisticated leap since his inelegant days with The Losers. His new band of discerning musicians, summon a tender sway and sensitive boogie through their nocturnal pop and soaring sonics. Their debut album evokes the optimism of the night, its dance floors and love. You would have to be a loser to miss the album release of Wellington’s most dapper band from 8pm this Thursday at the SFBH.
- DAL

Posted by Crystal Diamond at 5:49 PM

Labels: IF IT AIN'T BAD IT AIN'T GOOD, MAGIC IN A MANS BODY