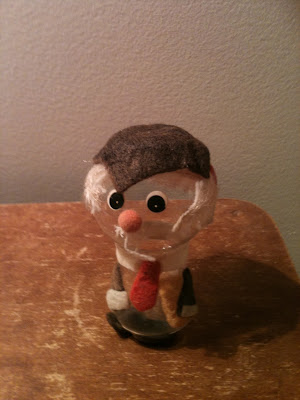 In my art practise I do a lot of pretending. Not deceitful pretending to purposely pull the wool over anyones eyes. Just very vivid imaginative pretending that is actually really real from my perspective even if it may not be from an outside perspective yet. Pretending is a good tool for planting ideas from your inner fountain in the soil of reality. If you never stop doing it there's a pretty good chance it's realness will come into fruition in the mind of others and all of a sudden it's not pretending anymore. I'm pretending to do a thesis at the moment. That means I actually am doing one I guess. Just not through official channels. (Pictured is my supervisor.)

I found this passage about pretending in The Art of Living : Socratic Reflections from Plato to Foucault by Alexander Nehamas :

Cicero himself, for example, does not separate irony from indirectness. He thinks, of course, of irony in positive terms. But he writes that "of the Greeks, we are told that a pleasant and humorous and genial conversationalist, who put up a pretence whenever he spoke, was Socrates (the Greeks called him an eiron), "his reference to pretending (simulare) leaves the question of transparency open. One might object, as Vlastos does, that "pretense" does not have its "basic use" of "deceiving" or "alleging falsely". Instead "pretending" must be understood in its "subsidiary use" as it is applied for example to "children 'pretending' that their colored chips are money ... or that their dolls are sick or die or go to school." This "subsidiary" use "altogether innocent of intentional deceit," allows us to understand eironeia as a figure of speech totally devoid of "willful misrepresentation" (27).


But many activities that go under the name of "pretending" cannot be reduced to either of these two starkly defined opposites. The children who pretend that some colored chips are money may not intend to deceive anyone by their pretense, but that does not mean that to them the chips are clearly not money either: children have a much more complex relation to toys than the dichotomy between the primary and the subsidiary use of "pretending" can possibly capture. To take another sort of case, I may pretend to be - I may act like - a classical scholar, all the while leaving my audience (and perhaps myself as well) in doubt as to whether I am one or not. To call someone a pretender, a simulator (as Cicero calls Socrates) shows neither that we know their mind nor even that they know it themselves.
Posted by Crystal Diamond at 4:09 PM