TO WHOM IT MAY CONCERN

here's a mail-out I just did on the electronic postal circuit (write me a message if you would like your inbox to be kept updated on movements within the Movement Movement!) :


This is to say THANKS to everyone who came down to the set of Becoming Carol Brown @ West Space during the NEXT WAVE festival, donned pastel skivvies and wigs, became Carol Brown and generously helped themselves revel in their practical tasks in one or more of the following episodes : 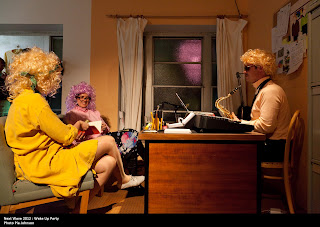 Carol in a sax consultation with herself in HER OWN PEACH OFFICE ... 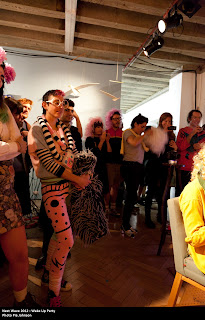 Some guests in Carols brain observing her sax crimes from their respective locations in the middle of everywhere ... 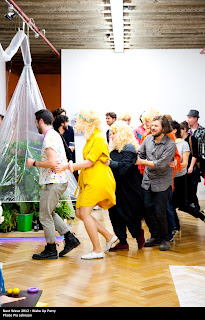 Conga line leaving The Party Within The Party Within to circle the oxygen chamber and finally impregnate the Aussie culture DJ set next door with their imitable brand of highly enthused radically sensual mythically scientific magical party logic ...


She could never have learned to party this hard without you !


+ thanks Pia Johnson for the pics !


Please stay tuned for the next tangible nugget to get panned out of the deep south of Carols' mind ...


CB aka CD aka CA aka CZA

Posted by Crystal Diamond at 10:35 PM

Labels: DAWN FROM THE OFFICE