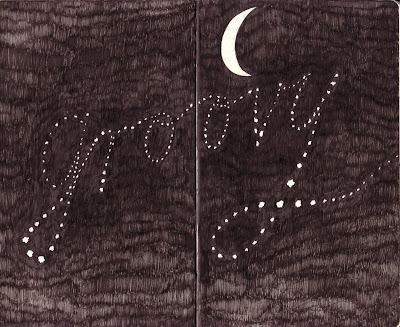 Want to hear a little 'dote about a funny thing that happened?

A couple of weeks ago while visiting DPAG, (Dunedin Public Art Gallery) I found myself lingering over Ronnie Van Hout's book I've Abandoned Me, a companion piece to his show of the same name that I'd seen in Wellington and loved deeply (circa 2004). On about my third visit it kept absorbing my attention. I gave in and splashed out thirty big ones so I could take it home.

One evening within the same week I was lying on some grass in the town belt drawing in my yellow fluoro* notebook. Currently I am working on a world changing (for me at least) party philosophy book that is dedicated to my sweet friend and former colleague Vito. He looks like Prince but slightly taller and possibly a better cook. I was writing on the page in a semi-whimsical font : This Gentle Revolution is for Vito. While I was doing that a little fluffy dog went nuts at me, yapping uncontrollably for a really long time. Her owner tried to appease her to no avail. She assumed it was because I was lying down. I noted the presence of the unruly puppy, whose name was Poppy, on the page with my pen.

Then last Thursday some friends opened a new gallery down here,
rice and beans. I helped out cutting fruit and pouring drinks for a while then hung in the VIP lounge low-key studio chill out zone next door. Who should I happen upon? Ronnie Van Hout with his lady Poppy and tiny son Vito. Ha!

*Not actually fluoro but says 'fluoro' on the cover.
Posted by Crystal Diamond at 4:45 PM