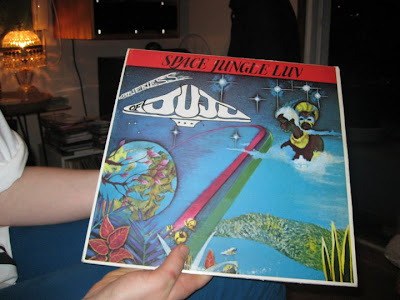 My sister Joanna is going to Africa next week. Here is an excerpt from Carl Jung's autobiography, Memories, Dreams, Reflections from when he was in Africa that I copied into a pink book last year.

C.G Jung is one of the many radical dead guys on my team who reckon I should go for it. He left Freud for dust because Freud was getting too dogmatic on his ass. My coinage of the term becoming a party basically means what he means when he talks about the process of individuation, which involves doing a deep sea memory dredge and extracting the sweetest most glimmery joules for parties to come.
But will probably be more of a hit with the kids.


The sunrise in these latitudes was a phenomenon that overwhelmed me anew every day. The drama of it lay less in the splendor of the sun's shooting up over the horizon than in what happened afterward. I formed the habit of taking my camp stool and sitting under an umbrella acacia just before dawn. Before me, at the bottom of the little valley, lay a dark, almost black green strip of jungle, with the rim of the plateau on the opposite side of the valley towering above it. At first, the contrasts between light and dark would be extremely sharp. Then objects would assume contour and emerge into the light which seemed to fill the valley with a compact brightness. The horizon above became radiantly white. Gradually the swelling light seemed to penetrate into the very structure of objects, which became illuminated from within until at last they shone translucently, like bits of coloured glass. Everything turned to flaming crystal. The cry of the bell bird rang around the horizon. At such moments I felt as if I were inside a temple. It was the most sacred hour of the day. I drank in this glory with insatiable delight, or rather, in a timeless ecstasy....


My psychic forces poured blissfully back to the primeval expanses....

The 'moment' in which light comes is God. That moment brings redemption, release....

A man who has not passed through the inferno of his passions has never overcome them....


If you are a fellow Jung lover I also recommend Man and His Symbols, the precursor to Babes and their Symbols which is still in the pipeline.


Thanks CJ, for keeping me n sync.
Posted by Crystal Diamond at 11:09 PM

Labels: DAWN FROM THE OFFICE