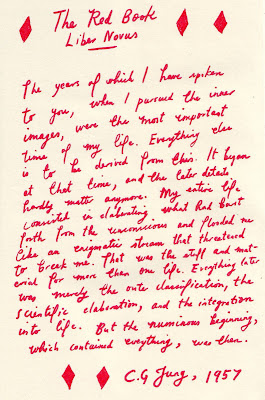 Yesterday I checked out Jung's Red Book at the University Bookshop. The book where he drew and painted and documented all his initial dreams and fantasies which were the basis for his life's work. I quote so much Jung because in October 2009 I had the same sense. A volcano nestled deep in the middle of my charisma erupted an explosive cacophony of images and ideas with such party physical intensity that I had to drop out of the lifestyle I'd been living in order to let them crystallize and manifest in a reality that can be shared.

My first visual explosions came out in red books too, but are much less somber and classically mythological than Jung's. His predated some sizable wars you've probably heard of and featured more than one river of blood. Mine are less hellish and more tropical, sensual, sassy and filled with puzzling peace party possibilities. Not to mention scores of love connections.

Which can only mean one thing :
Collective consciousness is hotting up, and nuzzling down.
Posted by Crystal Diamond at 5:31 PM