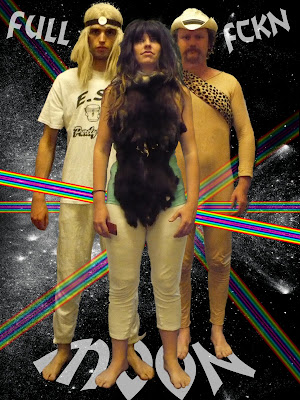 If you are in Melbourne this weekend I highly recommend checking out FFM at the Old Bar, Saturday 12th of March from 9pm. For a measly $6. Rumour has it another sparkly star from a particularly hygienic band from NZ may be joining them. Is it all just HOT GOSSIP?
Nobody knows!
Here's a story I did for threethousand in its extended form :
It has come. The planets have aligned to bring Full Fucking Moon into clear view of the naked eye, this Saturday night, from the unlikely vantage point of The Old Bar dance floor. Joined by Satanic Rockers, The Jackals and Asps, NZ's genre-embracing cosmic trio radically fuse elements of many to create the sensational self-coined 'Shaggs of neolithic heavy metal disco'.
Uniting in a rare interstellar constellation, Droszkhi (Torben Tilly) and Riffkah (Bek Coogan) have washed ashore from a land rich in rainfall and boiling mud while Electric Bongo Bongo (Steve Heather) has beamed his way directly from efficient Berlin. With the express purpose of leading you on a sonic exploration into deep space.
In Melbourne touring their timeless 12" Still Life With Black Light, produced during a residency in Worpswede, Germany. An atmospheric vinyl disc that, when played right, hypnotically releases ethereal radiophonic mist, rising from a molten river of rumbling rocky riffs which, while dormant, lie housed within a series of concurrent circular grooves. Prolonged listening may awaken that age-old realisation that, solid as matter may seem, it is actually made up of a rhythmic myriad of jittery harmonic sparkles.
More than just a phase, FFM is sonic salve to the psychedelic senses.
Posted by Crystal Diamond at 5:57 PM