INNERVIEW WITH COCO & ME 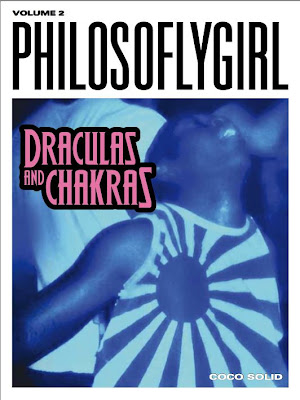 WHO IS CRYSTAL DIAMOND?

To me Crystal Diamond aka Caroline Anderson is a writer, artist and an existential rogue in this world of limits and hang-ups. We met many moons ago at would you believe.... parties (hang tight, this word will prove important later). One day out of the blue she chose to actively deepen our nice-enough friendship by writing to me from Melbourne. She openly told me about a tough time her heart was enduring, so I shared some of my horror stories and insights – and before you knew it, we were (and still are) close pen pals.

As trans-Tasman buds, I was attending her George St Clown parties in Melbourne (an amazing red-head crumping collective made up of Crystal and her sister Joanna – they even have official t-shirts). Crystal was coming to Aotearoa for boogies and the occasional drunk summit. Then something cosmic started to happen.

Crystal was sending me live reports from the field of her brain saying she was beginning to see some chronic connections. The ego fabric that protected everyone from their true selves was starting to unravel and make less sense to her. Some pretty uplifting secrets were beginning to transmit themselves to her and she was both overwhelmed and over-stimulated. Me being a cynic she managed to keep my faith with the odd psychic observation and super creepy coincidence. (Let it also be known that Crystal is one of my few friends who hasn’t thrashed psychedelic drugs and at the time was more into The Rza than any church, so I just observed this movement engrossed).

Her blog (www. crystaldiamondwrites.blogspot.com) was the de facto home of nervous laughter and puzzled looks among our friends, which was understandable – both Crystal and her musings were getting authentic and wild. She was amazingly honest, hyper-expressive and keeping it surreal. Crystal called her spiritual outlook ’The Party’ with this metaphor proving crucial to how she truly believes humanity should interact. (FYI Celestial updating, restyling and rebranding is something we constantly bond over, why does spirituality have to have such an unfashionable stigma for so many?)

To me, the party was Crystal’s truth and her writing was resonating with me too much to ignore.

Eventually I ended up finding my own remix of The Party Within, I recommend it. Caroline also sends everyone packages, letters, presents or casual symbols from their destiny. To this day I will look at something she sent me a long time ago (a candy wrapper, a picture, a note) and recognize the predictive message that was in it. Shit is usually levels. Anyway I’ll let her explain the rest. >

CS : I'm just gonna jump in the deep end with no water-wings. What is the party?

CD : This is one of those zen situations where it's easier to say what the party is not. It's not not pure ecstatic joy and it's not not also really sad. (Heapsa contradictions in zen). It is a new configuration of consciousness whereby the dividers dividing your mind into categories dissolve and all the contents falls into your inner outbox for processing. Your brain shuts up and stops being the boss and your heart takes charge, pumping tingly orders all round your body. It's a cellular office party. Inside YOU.

CS : You describe yourself as a rogue scholar but also a 'Party Artist'. What are the responsibilities of the Party Artist.
CD : Once a party artist has unlocked their inner party vault they party alone exploring all the zones of their own club for quite a while and enjoy themselves quite a lot. Retrace their steps, visit old friends. They continually keep emptying their inner outbox and keep it's contents in circulation via the postal system, internet, direct friend to friend contact. They channel everything that is inside them, ie. thoughts, emotions, genius plans, and look at it when it comes out to get objective perspective, distance themselves from the fruits of their own psyche in order to keep their minds fresh, clean and receptive to incoming transmissions. They revel in this task. Rogue scholars are people who take responsibility for their own education and shoot for honorary doctorates for going hard in their chosen field, outside of an institution.


CS : Crystal, this is gonna be a mammoth can of worms but what happened to you on that fateful day you discovered 'The Party Within'?


CS : How do people react when you grow through such a strong psycho-spiritual change?

CD : It polarises your friend base and sorts out the babes from the babes 2 be. Lots of people might reckon you have bi-polar disorder or delete you as their facebook friend cos you're getting too real. Others show mega compassion, understanding and patience while you moodily struggle through the transistion from being human to realising you are actually a dolphin crossed with fireworks then learning to embody that fact inside your human shell. Many bring you back to earth and enliven you with the magic of SOUNDS. Music has been my greatest saviour.


CS : Who are some of the people (alive and dead) you call on when you are rendering a large file with the cosmos?

CD : I must psychically call on Mum cos she always shows up. For some reason for the big ones I always call on Andrew Liversidge, an artist from Melbourne who I call my involuntary psychic professor. I write to him all the time and he never writes back but for some reason that doesn't deter me. He has some special powers that transcend bodies for shiz. Also YOU (Coco), Bek Coogan, Carl Jung, Dan Lucka, Joanna, Torben Tilly, Jo Randerson, Sam Crawford, SECRETS. There are many.


CS : You regularly send people in your network parcels and artifacts. Why?

CD : There are many reasons for that. To pop the bubbles around private documents, starting to brace myself for the critical views of the external world and learn how to respond without getting hurt feelings. Provoking discussion regarding the content, making a physical map of the important connections that contribute to the book I'm writing, The Party Within. Planting seeds of ideas for future collaboration, no matter how oblique they might be. Also so if I die the party lives on, it is a big puzzle and will link up all these amazing characters from all different areas of my life and they might have fun making a book or something together. It is a spontaneous evolver of a project, nothing is set in stone and could all change on a whim tomorrow. It is more about the joy and connecting capabilities of the process than any sort of outcome.


CS : Transient as they are to you, what have been some of your favourite possessions?


CS : Describe this monster artistic undertaking you are shadowboxing with in Australia, where you live.


CD : Basically is an installation at Westspace that functions as a mini-series, loosely based on some of my experiences. The project is in the Next Wave festival and is called Wake Up And Wait For The Sun To Rise : 500 Methods For A New Beginning. It's a one month residency at the Meat Market which I am wagging right now to write this. Our collective is TAPE PROJECTS and the series is called Becoming Carol Brown, taken from an extra role I played on Flight Of The Conchords in 2008 who keeps taking a bus out of town, which is something I frequently do.The character is not exclusive though, it is a vehicle for transmitting a bunch of ideas and anyone has the opportunity to step into the role. The room in Westspace is the set and we will provide prompts for action that people can get amongst if they choose to. Costumes will be provided. It is part peach office, part lilac house, part black hole for trashed thoughts, part beach. Each day will be a new episode, some we have roughly pencilled in are ... ANTICIPATING ANTICIPATION, CAROL GETS SOME PERSPECTIVE, THE CYCLICAL NATURE OF BIKE RIDING, A CHRISTMAS CAROL and HUNGOVER BEFORE IT'S BEGUN. Theme song by SECRETS.


CS : Tell us about your recent exhibition in Wellington and the whole 'Year of the Rat' and 'unpacking' ethos surrounding it


CS : How you live totally wastes positive visualization in a fight, lets be real. How would you describe the serendipity and connected way in which things transpire for you on a daily basis.

CS : Where were you born?


CS : Tell us about Crystal Diamond Writes and how that has helped your process

CD : It's a blog I started in October 2009. At first words flew out forcefully straight onto the internet, so many of them in a very short space of time. Outlining my initial book idea, talking about how we are all mash-ups of all the characters books, music, environmental factors etc that go into our existence. Sharing some handy life hints then I did a bunch of profiles on characters that had affected my life dramatically. Then I put lots of quotes and things on it that gave me heart and egged me on when I wasn't getting heaps of encouragement elsewhere. It's a good instant way to socialise psychic fruits without having to go to the post office. Plus people become aware of the buzz you're on and doors open up as a result.

CS : How did you get your name?

CD : I was about 4 and my brother and sister Sean and Joanna used to go down to the cattlestop and "go to town". In their place Billy and Sally would return. They looked heaps like Joanna and Sean but weren't. Sometimes they'd swap letters and be Silly and Bally but there were always fights over who got to be Silly. I didn't just want to be boring old me so I dubbed myself Crystal Diamond Necklace, named after my necklace which was actually red blue and white beads.


CS : How did dressing up as Tina Turner when you were a child teach you the meaning of expression? (I'm just looking for an excuse for you to tell that story cos it makes me laugh so hard)

CD : I don't have time to regail you right now ! but it taught me that if you can't do it, just mime and everyones parents will still think you're cute.


CS : Based on your experience and limitless love for The Party, how can readers at home lambada with life?

CD : Do whatever you want to do, hard and charismatically.
DIG DEEP, BUY MY BOOK
Posted by Crystal Diamond at 12:03 AM