HEY! EXCUSE ME ! here's an article I wrote for Kerry Ann Lee's Permanent Vacation magazine. The one in the zine is handwritten in a moleskine and has some pictures and the answer to the Double Jeopardy Riddle Joke upside down at the start. So you're missing out a little bit by reading it on the net. Missing the punchline, but if you don't have a copy handy please read on and you can ask someone or stumble upon it later .... 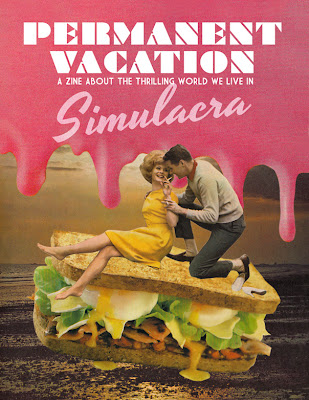 CANARY IN A GOLDMINE

The idea for this story grew from a nugget Kurt Vonnegut gave me once, when we were between the covers of a collected volume of his, Wampeters, Fomas and Granfalloons. He was relaying an interview he'd had with Playboy a few years earlier. It was written with ink, that had once been liquid, but through a chain of magical processes I don't understand, had dried onto a succession of bound pages sandwiched inside a slightly thicker cover. (Made from wood I think.)


Not only had the ink performed this unlikely feat of transformation, it had done so in a series of formulaic shapes that my mind ascribed a sound to. Alone they were quite weak. Only a couple of them meant something or could infer a satisfying sound as they stood. I soon realised that on the most-part they were relying upon each others simultaneous presence to make a complete word and even then they needed still more words to make a sentence. Not all of them needed to be there for every word, different configurations united to make different sounds that evoked a range of feelings and images. When I saw the shapes meet I also saw meanings. Please don't ask me how I did that.


I can't help being magic.


To wind it back a bit, reiterate, clarify and recap, somewhere along the line (if we can call it that) these particular shapes I was seeing had become visual representatives of assorted sounds. Individually at first, then they'd congregated together to make even more complex and varied sounds, with meanings too. Some cool ancestors sorted that out so we didn't have to organise it. Thanks for that! Kurt had recognised the communicative power of these letters and strung them together in such a way they managed to say some really radical empowering business that had a physical impact on my body and altered the course of my life. Long story short, a book full of these meaningful chains of letters arrived in my hands and I read it in bed. There was no time to question how all those previous miracles had occurred, I didn't want to pop a valve. So I just read it and wept with joy at the like mind I'd found.


This is what he said about people like us :


Writers are specialized cells doing whatever we do, and we're expressions of the entire society - just as the sensory cells on the surface of your body are in the service of your body as a whole. And when a society is in great danger, we're likely to sound the alarms. I have the canary-in- the-coal-mine theory of the arts. You know, coal miners used to take birds down into the mines with them to detect gas before men got sick. The artists certainly did that in the case of Vietnam. They chirped and keeled over. Nobody important cared. But I continue to think that artists - all artists - should be treasured as alarm systems.


For the purpose of this article I'll be the canary and you can be the reader of the magazine. Because that seems like the most obvious dynamic to adopt.


It's a tale about fully discovering your bird side, having a full-blown flap attack and incessantly tweeting about it to all your friends in the hope they will be seduced into coming for a fly with
you. In order to get a common overview of the societal situation and work/play together to nut out a plan of embrace of the honest parts that deserve illumination and investment (both energetic and financial). Empower, sustain and support those parts, lionize them avidly and either zenly integrate the stuff that sucks and hurts (if necessary) or let it get eclipsed out of your mind, and in turn, your reality. Seeing we are all party to this system we inhabit and attacking it is simply attacking ourselves. Ouch. Why not fathom it instead.


Let's zoom out and start with some wide-angle wondering ... Maybe an altogether completely new system is the ticket? That no one has ever thought of because the conditions haven't been quite right before? How can we turn the most inspired, lively, creative and conscious streams of consciousness into the MAINSTREAM OF CONSCIOUSNESS?


Probably bit by bit, one step at a time. Inside out. Start, or continue revolutionising the microcosm that surrounds you and watch in amazement as your dreams go hard and macro without you having to try anymore. This is where doing your art live and direct from the heart comes in. If you do this without stopping to think and censor yourself, for fear of embarrassment or revealing the depths of your vulnerability, you will have the unstoppable power of nature and an unexplainable mystery on your side. What springs forth organically can tell us a lot about ourselves. Be a witness, not a judge. Face the bits that freak you out and respect their presence. Peripheral acknowledgement of problems is useful, without becoming consumed by them. If we continue to plant baby seeds of solutions in each others minds the answers grow of their own accord. The world is a massive puzzle designed to be solved by us and so much of the work has already been done. It just needs a freaky new map.


If fathoming is the goal then communication is paramount. We need an action plan, like how the aforementioned letters teamed up to bring us words. Instead of attacking, how about fusing juju for a mass perpetual woo of the system? Turn it's knees to honey, dazzle and cavort it until it is putty in the hands of party artists with universal natures. Who are guided by their hearts in the interest of preserving and respecting earth’s natural bounty. Live in harmony with that which is truly dope. Have you noticed how parties can be fun and wild and they can also be political, have power and run countries. Why can't they be all of the above? To implement this reality we would probably need hoards of CHARISMA and talent between us and we would need to be wise with how we spend our assigned rations of sweet joules.


The greatest and most transformative treasure of all.


Being a specialised writer canary, who is also part dolphin (privy to echolocation) and part fireworks, I am someone who cannot for the life of her stop exuding words in all directions. Kurt calls writing socially fruitful meditation, which I relate to completely. I exhale they fall out onto the page or into the e-window. Can't always be sure who's saying them but I can feel them write through my whole body and even in parts of me that are not my body, so I do not hesitate to release them into the world. In spite of sometimes exposing my true nature as being totally nuts. But nuts in the crazy sense are in the eye of the beholder and anyway, nuts in their true sense are a dynamic snack full of energy and should be shared amongst friends and friends to be, rather than hoarded and sat on. Unless you are going into hibernation and need a massive store for winter.


The alarm bells I ring are not warnings of danger. They are PARTY ALARM BELLS. Warning society of how incredibly ecstatic, alive and tingly it could be if we excavate our lack of understanding about how ecstatically alive with tingles we are. What absolutely sensational creatures. Basically just harmonic waves, waving back and forth to each other. “Hi!” We could know no bounds if nobody wanted to know them.


Having said that, a few bounds are very practical to have. Not knowing them is only really great until you realise your lack thereof is jeopardising relationships and freaking out your mum. I lost all mine when I dissolved my ego in a puddle of love and am still trying to knock up some prefab partitions so as not to step on too many toes in the process of igniting other eternal internal party flames (which inevitably go external). Can take a while to find out where they go, but conversation and tentative testing of them is a great method for re-establishment. I'm doing it the Japanese way this time round and making them from paper. That way the damage is minimal when earthquakes inevitably strike.


The gold I chirp of is psychic gold, found by panning down deep, beyond personal matters to the infinite realm of imaginary solution and childlike wonder that lies beneath the conditioned falsehoods that pollute our minds and confuse our perceptions of reality. Sounds like a big sweeping call to make but I will still make it lightly now and break it down further in my coming output of word-flow. One that is likely not to cease until I have distilled a crystallised Elixir of Eternal Parties. The alchemical process I employ to perform this alarming task is to make a literal Peace Party Puzzle for zen party pilgrims who care deeply about partying and would like to engage in expansion of their puzzling spherical reality in a decidedly novel way. All the while contributing to a radically logical new myth. 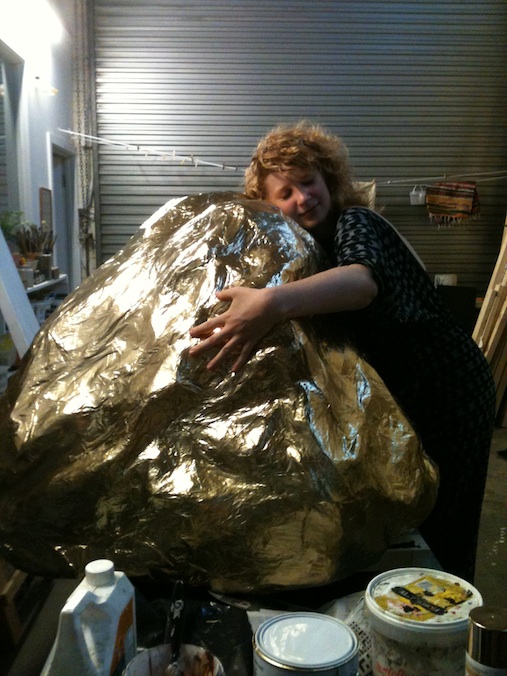 Before I explain any further, please bear in mind the meaning these following letters adopt when placed alongside each other ....


Zen does not attempt to be intelligible, that is, understood by the intellect. The method of zen is to baffle, excite, puzzle and exhaust the intellect until it is realised that intellection is only thinking ABOUT ; it will provoke, irritate and again exhaust the emotions until it is realised emotion is only feeling about, and then it contrives, when the disciple has been brought to an intellectual and emotional impasse, to bridge the gap between second hand, conceptual contact with reality, and first hand experience.


To paraphrase the birdman in Kevin Hooyman's exquisite new book The First Sign of Anything, it's all about having a series of small targets that keep giving you good feelings and regenerate your joules for the next hit. Lots of little art parties that conjoin to create a monumental art party that no individual could've ever created (or curated) alone. Cos doing it alone isn't REALLY PARTYING.
First target was to get us both on the same page.


Welcome to my massive puzzle/freestyle thesis about connections and parties. You're party to it now. Just got involved. That article was secretly a letter inviting you to participate and by reading it you already are. A psychic seed has been planted that you’ll have a hard time uprooting because I tucked it really far in while you were marvelling about how letters met each other and thought to make words. Plus it's the first clue in the puzzle. Which is timeless so it doesn't matter if you've already received your other first clues


Now let's end with a quick round of Double Jeopardy! (aka backwards Q and A, but for this one the A’s a Q too and vice versa) I'll be host.

Labels: ATTENTION SPANS, CHIRP N KEEL, WHERE IS THE BOUNDARIES