This year I have been living in a sub-lease slipstream, floating from house-to-house since returning to Melbourne in February. I've inhabited at least 10 houses in 2013. But it's all been running super smooth for some reason. The next apt lodging always pops out of the woodwork just in time, and I get to spend turbo time hanging with a variety of quality genies, ride in all directions home from work and never get sick of a neighbourhood. My current one is with my bro Sean who's boombox collection is worth writing home (wherever that is) about. I'm staying in the room of the lovely, tangibly successful writer Romy Ash, while she's off having a wordy adventure in NYC. 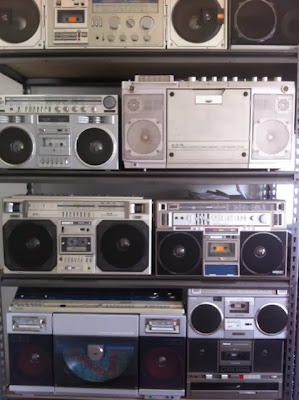 Usually when I move in to a new place I scan the bookshelves and lucky dip a title for further perusing. I love it when they are basically giving me the thumbs up saying "yeah, do your thing! this Party Within buzz you are on is really ancient and universal, here we've already articulated it for you super succinctly, go forth!" which is what Alan Watts has been doing lately in The Way of Zen.

See! (from the chapter,  Sitting Quietly, Doing Nothing) :

Whether trusting our memories or trusting the mind to act on its own, it comes to the same thing: ultimately we must act and think, live and die, from a source beyond all 'our' knowledge and control. But the source is ourselves, and when we see that, it no longer stands against us as a threatening object. No amount of care and hesitancy, no amount of introspection and searching of our motives, can make any ultimate difference to the fact that the mind is

Like an eye that sees, but cannot see itself.

In the end, the only alternative to a shuddering paralysis is to leap into action regardless of the consequences. Action in this spirit might be right or wrong with respect to conventional standards. But our decisions upon the conventional level must be supported by the conviction that whatever we do and  whatever 'happens' to us, is ultimately 'right'.

In other words, we must enter into it without 'second thought', without the arrière-pensée of regret, hesitancy, doubt or self-recrimination. Thus when Yün-men was asked, 'What is the Tao?' he answered simply 'Walk on!'

But to act 'without second thought', without doublemindedness, is by no means a mere precept for our imitation. For we cannot realize this kind of action until it is clear beyond any shadow of a doubt that it is actually impossible to do anything else. In the words of Huang Po :

Men are afraid to forget their minds, fearing to fall through the void with nothing onto which they can cling. They do not know that the void is not really the void but the real realm of Dharma...... It cannot be looked into or sought, comprehended by wisdom or knowledge, explained in words, contacted materially (ie. objectively) or reached by meritorious achievement......

...As a zen master said, 'Nothing is left to you at this moment but to have a good laugh.' In this moment the whole quality of consciousness is changed, and I feel myself in a new world in which, however, it is obvious I have always been living. As soon as I recognise that my voluntary and purposeful action happens spontaneously 'by itself', just like breathing, hearing and feeling, I am no longer caught in the contradiction of trying to be spontaneous. There is no real contradiction, since 'trying' is 'spontaneity'. Seeing this, the compulsive, blocked and 'tied up' feeling vanishes. It is just as if I had been absorbed in a tug of war between my two hands, and had forgotten that both were mine.

No block to spontaneity remains when the trying is seen to be needless. As we saw, the discovery that both the voluntary and involuntary aspects of the mind are alike spontaneous makes an immediate end of the fixed dualism between the mind and the world, the knower and the known. The new world in which I find myself has an extraordinary transparency or freedom from barriers, making it seem that I have somehow become the empty space in which everything is happening.
Posted by Crystal Diamond at 4:36 PM