In short, trickster is a boundary-crosser. Every group has its edge, its sense of in and out, and trickster is always there, at the gates of the city and the gates of life, making sure there is commerce. He also attends the internal boundaries by which groups articulate their social life. We constantly distinguish-right and wrong, sacred and profane, clean and dirty, male and female, young and old, living and dead-and in every case trickster will cross the line and confuse the distinction. Trickster is the creative idiot, therefore, the wise fool, the gray-haired baby, the cross-dresser, the speaker of sacred profanities. When someone's sense of honorable behaviour has left him unable to act, trickster will appear to suggest amoral action, something right/wrong that will get life going again. Trickster is the mythic embodiment of ambiguity and ambivalence doubleness and duplicity, contradiction and paradox.


That trickster is a boundary-crosser is a standard line, but in the course of writing this book I realized that it needs to be modified in one important way, for there are cases in which trickster creates a boundary, or brings to the surface a distinction previously hidden from sight. In several mythologies, for example, the gods lived on earth until something trickster did caused them to rise into heaven. Trickster is thus the author of the great distance between heaven and earth; when he becomes the messenger of the gods it's as if he has been enlisted to solve a problem he himself created. In a case like that, boundary creation and boundary crossing are related to one another, and the best way to describe trickster is to say simply that the boundary is where he will be found--sometimes drawing the line, sometimes crossing it, sometimes erasing or moving it, but always there, the god of the threshold in all its forms.


In other news, mine and Cocos new DJ duo MIXED MESSAGES will be having our debut this weekend at a BORN HAIRY USA party at Joanna and Michael's house. She rustled up this genius promo pic which neatly encapsulates our vibe.. She as villain selecta The Baroness, me as Colombian baby Jesus Divino Niño (and vice versa) : 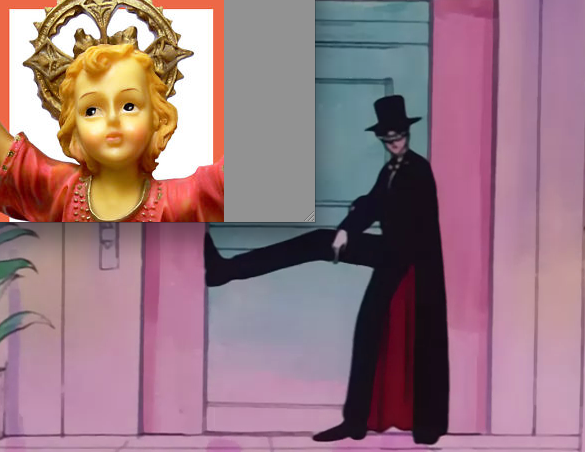 Posted by Crystal Diamond at 4:37 PM

Labels: WHERE IS THE BOUNDARIES