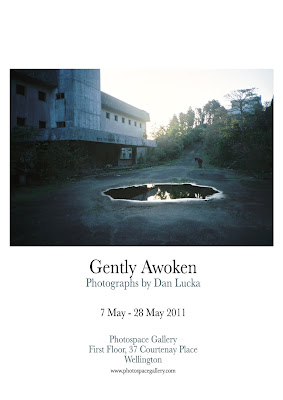 If you live in Wellington, please go to Dan Lucka's somnambulant art show at Photospace on Courtenay Place above the Sahara kebab shop...

If not, here is a poignant rendition of someone discovering their Party Within by Rilke :

It might be little more than a year ago, that something strange happened to him in the castle garden which sloped down fairly steeply to the sea. Walking up and down with a book, as was his wont, it occurred to him to lean against a forking of two branches, at about the level of his shoulder in a shrub-like tree, and immediately he felt himself so pleasantly supported in this attitude and given such ample rest, that he remained like this, without reading, completely absorbed into Nature, in a state of almost unconscious contemplation. Gradually his attention was awakened by a hitherto unknown sensation: it was as if almost imperceptible vibrations were passing from the interior of the tree into him; he explained this to himself without any difficulty by supposing that a wind, not otherwise noticeable and which was, perhaps, creeping over the slope close to the ground, was making itself felt in the wood, although he had to acknowledge that the trunk seemed too stout to be so markedly affected by such a slight movement of air. What interested him particularly was not, however, this idea or one of a similar kind, but he was more and more surprised, indeed impressed, by the effect produced in himself by what was passing over into him without ceasing: he felt he had never been filled with more delicate vibrations, his body was being treated in some sort like a soul, and made capable of receiving a degree of influence which could not really have been felt at all in the usual well-defined clarity of physical conditions. In addition to that, he could not, in the first moments, properly distinguish which sense it was by which he was receiving so delicate and pervading a communication; furthermore, the condition it was producing within him so perfect and persistent, different from all others, but so little to be represented by the heightening of anything he had ever experienced, that, for all its delicious quality, he could not think of calling it pleasure. All the same, endeavouring always to account for the least perceptible experiences, he insistently asked himself what was happening to him and almost immediately found an expression which satisfied him, as he said aloud to himself that he had reached the other side of Nature. As happens sometimes in a dream, the expression gave him pleasure, and he believed it to be almost completely apt. Everywhere and more and more regularly filled with this impulse which kept recurring at strangely regular intervals, his body became indescribably touching to him and of no other use than that he might be present in it, purely and cautiously, exactly like a ghost, already living elsewhere, that sadly enters what has already been gently laid aside, in order to belong once more, though even absentmindedly, to a world once felt so indispensible. Looking round him slowly, without otherwise altering his position, he recognized everything, remembered it, smiled at it as it were with distant affection, let it be, like something known long ago, that had once, in former circumstances, been connected with him. He looked at a passing bird, a shadow attracted his attention, even the path itself, the way it went on and passed out of sight, filled him with thoughtful insight, which seemed to him so much the purer in proportion as he knew himself to be independent of it.